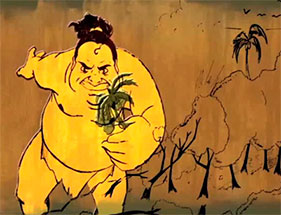 The transmission of intangible cultural heritage (ICH) has a direct impact on the sustainable management of biodiversity and natural resources.

During my secondment at the UNESCO headquarters in Paris in July 2015 I was able to attend exhibitions of the International Scientific Conference “Our Common Future Under Climate Change” http://www.commonfuture-paris2015.org/.

The traditional knowledge and practices of indigenous and local communities is related to the way in which people interact with their environment and surroundings in their daily lives. For instance, over centuries people have learnt how to grow and preserve food in order to survive in difficult environments. They know what varieties of crops to grow, when to sow and weed, which plants are poisonous; which, for example, can be used for control of diseases in plants, livestock and humans. They know very well how to maintain the environment in harmony. I have highlighted the word “harmony” because that is the cornerstone behind the notion of Sustainable Development.

In fact, the relationship between ICH safeguarding, by ensuring the long-term viability of traditional ecological knowledge and practices shared by a community (or a group of people), and the notion of Sustainable Development, by ensuring a better quality of life for everyone now and for generations to come in the form of human development, personal growth, stimulation of creativity and sensitivity, is reflected in three overlapping stages:

The first one is related to environmental management and how the use of traditional and ecological knowledge, developed from the experience of previous generations and adapted to the local culture and environment. Harvesting rotations is an example of this.

The second is related to social values and the cases when the subject of traditional knowledge and shared local practices is the cultural heritage of one’s own territory. In this instance, the individual’s sense of belonging tends to be reinforced. This sense of belonging and identity is a fundamental social glue, a pillar of territorial identity and local development.

The third is related to cultural diversity and when the subject of traditional knowledge and local shared practices is the heritage of other places and cultures. In these cases, the individual enrichment depends on the ability to understand and internalize the values that these cultures carry with them, as a first step to overcome the natural distrust that people can show towards other cultures.

An example of ICH as an element of environmental sustainability is the legend of the giant Uab (http://www.pbslearningmedia.org/resource/prcc12.sci.life.eco.modernuab/an-ancient-legend-teaches-climate-change-adaptation/ ). Uab is a boy who grew into a giant as he ate everything around him became so heavy that the island he lived on began to sink. His appetite caused other problems, including a change in weather patterns and damage to coral reefs. Left with no choice, the islanders eventually killed Uab. This legend mirrors what is happening today globally and in the Pacific Island region with the unsustainable use of land, marine, and freshwater resources.